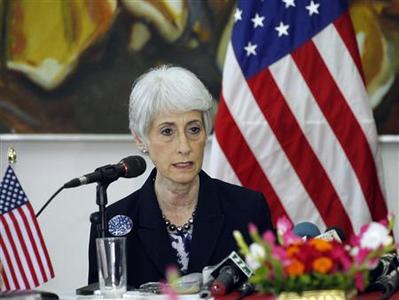 (Reuters) - International garment buyers, particularly those in the United States, have a crucial role to play in ensuring the safety of Bangladesh's garment workers, a senior government official said on Monday.

A series of deadly incidents at factories in Bangladesh, including the collapse of a building housing garment factories last month that killed 1,130 people, has focused global attention on safety in the industry.


"On the labor issue, absolutely, buyers have a critical role and they must be engaged," U.S. Under Secretary of State for Political Affairs Wendy R. Sherman told a news conference in the Bangladeshi capital.


Western retailers and brands are struggling to assess safety risks at thousands of Bangladesh garment factories after the April 24 collapse of the Rana Plaza building in a Dhaka suburb.


Their task is made tougher by a lack of robust safety rules, a severe shortage of trained building inspectors and equipment needed to make proper safety assessments, and widespread concern about corruption.


Sherman said foreign companies should not give up on Bangladesh.


"We are encouraging international investors not to turn their back on Bangladesh, because the solution is reform, not withdrawal," she said.


"Ultimately, success will depend on the will and commitment of industry, government, civil society, and every day Bangladeshis to come together to change the culture of workplace safety and worker rights in Bangladesh," she added.


She said the United States was working with U.S. companies that source garments from factories in Bangladesh to secure their support for better safety inspections.


The United States was also funding labor and civil society organizations to promote respect for rights at work, including freedom to join a trade union, she said.


The collapse of the Rana Plaza was the world's deadliest industrial disaster since the Bhopal gas leak accident in India in 1984.


In November last year, 112 workers, most of them women, were killed in a fire at a garment factory on the outskirts of Dhaka.

The Business of Fashion